This week I’m taking you to Soviet Kazakhstan, when World War II was just beginning, and one girl was determined to fight for her Motherland. Even though she was rejected at first and later only assigned clerk duty, she taught herself how to use a machine gun and eventually became Hero of the Soviet Union. That was not only the highest military honor, but she was the first Kazakh woman to receive it. Her name is Manshuk Mametova and I want to take you along on the wild ride that was her life.

In 1922 in Zhaksus, a small village in the steppe of the Ural Region in Kazakhstan, a shoe maker and his wife welcomed their fifth child into the world, a daughter they named Mansia. Little Manshuk, as her mother affectionately called her, spent her childhood learning to ride before she could even walk and spending long nights around the yurt’s hearth, listening to stories about heroes and heroines, adventures and fairytales. Sometimes her aunt Amina would visit from Alma-Ata, and tell stories of a city built of stone. When she was around three or five years old, her parents sent her to live with her aunt as it was custom. (Well, it was custom to send the child to its grandparents, but they had died already, so she was sent to her aunt instead.) It seems that soon after her parents died, or maybe they died before and she was adopted then – sources are unclear. What is certain however, is that her aunt took her with her and she grew up in the capital.

Her childhood in Alma-Ata seems to have been a very happy one, filled with the scent of apple trees growing all over the city. Her aunt was a strict but loving woman and every word of appreciation would make the little girl beam with joy. And when she was old enough to go to school, she soon felt like she had gained a second family. She loved to learn and the other girls loved her for her enthusiasm and kindness. In the picture you can see her on the top right with two of her classmates. As the years passed by, Manshuk learned more and more about her nation and learned to love its vast beauty. Especially Moscow stole her heart and she would dream of walking over the Red Square for years to come. 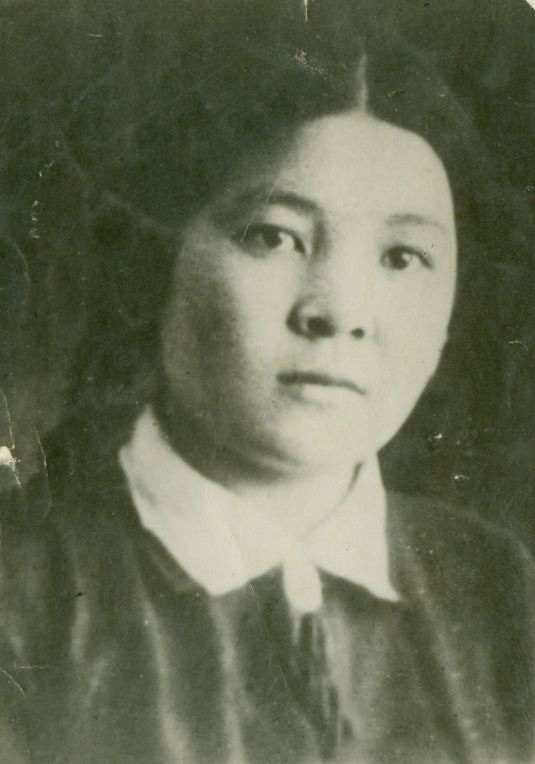 After graduating, she entered a medical school program and later the Alma-Ata Medical Institute. At some point in her medical education, she took a job at the Secretariat of the Council of People’s Commissars, which aimed to fuse Kazakh culture with Soviet values. Life was good. She had a job she liked, friends and family she adored and soon, soon she would finally see Moscow! It was the Summer of 1941 and 18-year-old Manshuk was planning to go see a sports parade. But it was not meant to be. Nazi Germany had bombed Sevastopol, Odessa and Kiev and was now approaching Moscow.

Even though the war was still far from Alma-Ata, Manshuk was one of the first to volunteer at the local recruitment office. Inspired not only by her love for the Soviet Union and her country, but also by the countless stories she grew up with, Manshuk wanted to take an active part in defending her homeland.

Even though the Red Army accepted women into their ranks, her request to go to the frontlines was rejected. But she persisted. It took one year until she was finally accepted into the Army – however only as a desk clerk instead of a warrior. It was a first step though and so Manshuk became a secretary and later a nurse as well. But still she dreamt of being a warrior. And so, between her administrative duties and her work in the local field hospital, she taught herself how to shoot a machine gun. Eventually she was asked to show her skills to her superior and she didn’t miss a single target. Impressed, her commander assigned her to the 100th Rifle Brigade and finally, in October 1942, she was on her way to the frontlines.

Her Regiment fought well and soon Manshuk had earned not only the rank of Senior Sergeant but also the respect and trust of her comrades. Never did she part with her beloved gun. But it wasn’t only battle that happened on the front lines but life as well. Manshuk made friends and shared stories of home with them. Sometimes she would get a letter or a parcel from home and it would remind her of the sunny days in an apple-scented city that she so passionately defended. However she did find something on the front that she didn’t back home: she fell in love. In a letter to her sister she wrote about fellow machine gunner Nurken Khusainov and how it was impossible now to act on her feelings. Apparently Nurken thought the same and so it remained unfulfilled. For their next assignment would mean death for both of them. 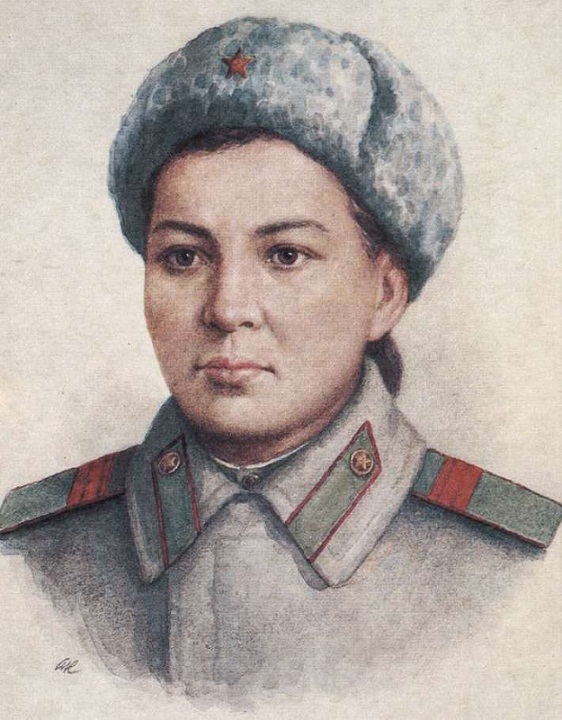 On October 15, 1943, Manshuk and her regiment fought to liberate the city of Nevel on Russia’s western border – a difficult battle from the get-go, as the Germans occupied higher ground. The Soviets still weren’t able to advance after hours of battle, but continued to suffer heavy casualties, Nurken among them. To find a better spot to attack and to give the Germans another front to worry about, Manshuk and another machine gunner broke away from their unit. Soon they found what they were looking for: a small hill on the flank of the German army with a barricade for machine gunners on top. They quietly killed the enemy soldiers occupying the post and opened fire. The unexpected attack broke the German counter-offensive and finally the Soviets were able to advance. 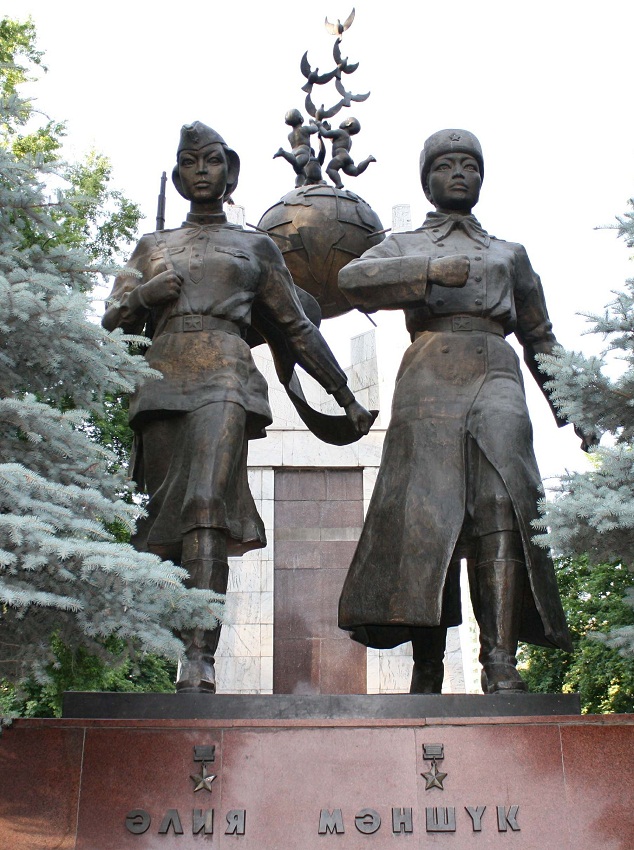 Crawling between three different machine gun posts the two gunners relentlessly fired on the enemy, trying to avoid being hit themselves. At some point Manshuk was knocked out by a mortar shell, but regained consciousness and continued her assault. More than once her comrade asked her to retreat, but she refused. She knew that as soon as they stopped shooting they will be overrun and everyone else will die as well. The battle had waged for an hour when a grenade hit their post, immediately killing her comrade and mortally wounding her. Even so, Manshuk would not let go of her gun. With her last strength and nothing to lose, she occupied the best possible position and continued shooting until her last breath. It might have been her who finally turned the tides of the battle and without her the Red Army would not have been able to liberate Nevel.

Her body was recovered after the battle, her hands still clutching her gun, and buried in the city’s cemetery. For her bravery, she was posthumously awarded the title Hero of the Soviet Union, the highest honor in the USSR. There are also a bunch of statues, one in Nevel for example and one in Almaty (that’s what Alma-Ata is called now), and streets and schools are named after her (including her former High School) and there are songs about her! Even though she wasn’t able to return to her beloved hometown, I think Manshuk Mametova would have been proud to know she is remembered for making a difference. And maybe that she now has her own folk tales as well.