Did you know that Alaska used to be Russian territory? It was only sold to the US around 1870 and suddenly the social landscape changed. Into these tumultuous times today’s heroine was born and against all odds, she became one of the richest people in the state. Hear the story of Changunak Antisarlook Andrewuk, Sinrock Mary, the Queen of the Reindeer.

When Alaska changed government, Changunak was born. Her mother was of the Native Inupiat people and her father was Russian. Likely a merchant or fur trader, he came to Alaska to make money, but returned home once his contract with the trading company ran out – alone. Their fate was not a singular one; when the Russian traders departed, they left behind a new generation of children with mixed heritage.

Changunak’s childhood was never boring. She grew up in St. Michael, a trading post where lots and lots of foreign ships docked and where there was always something to see. She observed the strangest people coming from these ships, dressed in foreign clothing and speaking languages she had never heard before. The girl soaked up everything she saw and before she was past her teens she spoke Russian and English besides her native tongue, Inupiat, and several of its dialects. But not only did she learn about other cultures but also her own. Her mother taught her the ancient ways of her people. She learned about herbalism, how to hunt and set traps and how to tan and sew animal hide, the trades of her ancestors. But most importantly she learned generosity, as was the Inupiat way. 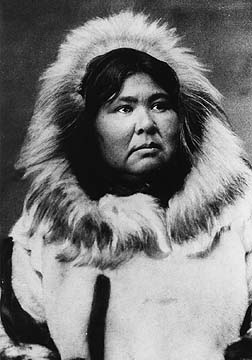 At some point, when she grew from child to woman, she would receive the traditional chin tattoos. Presumably not much later, Changunak met a young Inupiat hunter named Charles Antisarlook, and in 1889 they married. The couple settled in Cape Nome, not far from St. Michael, where they soon met the man who would change their lives. Captain Michael A. Healy was an American who had been sailing the Alaskan sea for more than two decades and served as the only contact to the government for many remote villages. So even though he looked a bit unusual to the Natives, being half black, he was always a welcome guest. When the Antisarlooks met him, he was looking for interpreters to help him document the population of the coastline and upon finding out that the pair spoke English, he hired them on the spot. I suspect that this is when she got the name she was known by: Mary. And soon they set sail on board the USS Bear.

During their travels the Captain once more witnessed the Native Alaskan’s fight against the long, harsh winters, against starvation, and an idea that had been brewing in his head for years finally took form. The Chukchi people of Siberia were herding reindeers, why couldn’t the Alaskans? They just needed to ship the deer over, because at that point there were none in North America. Of course such a plan needed time but in 1892, only two years after he had delivered them back home, the Captain stood at the door of the Antisarlook family once again. This time he asked them to come with him to Siberia to help with the negotiations. And once again they sailed out on the Bear.

Arriving at their destination, they met up with a delegation of Chukchi and soon enough Changunak was called up to translate, being the only one in the party to speak Russian. She could however not fully understand the Siberian dialect, which angered one of the men who struck her right across the face. She did not flinch but instead stood tall, calmy asking in Russian: “Is there anyone who can understand what I’m saying?” Slowly one of the Chukchi raised his hand. “Come over here and help me,” she demanded. And he came and stood next to her. He would translate his comrades’ words into Russian which she then would translate into English for the crew of the Bear. From there negotiations went smoothly and the ship returned to Alaska, having secured 1300 reindeers to arrive over the course of the next four years. The Teller Reindeer Station was opened to teach the Alaskan population how to care for the new animals and husband Charlie began an apprenticeship there. During that time Changunak noticed that contrary to their original purpose, the reindeer were exclusively distributed amongst missionary posts and she complained. Eventually the government gave in to her constant pressure and Charlie and Changunak were the first Inupiat to own their own herd of reindeer.

Two years later their herd had doubled and now Charlie’s two brothers had become herders as well to help them out. They build their own reindeer station in the small settlement of Sinuk or Sinrock, which is where Changunak’s more familiar name comes from: Sinrock Mary. Their herd was now one of the largest in the country and that winter the government asked them for a favor. There were people trapped in the ice and they asked for them to send their herd up there to save them from starvation. Following the Inupiat principle of generosity they decided Charlie would go North with a large part of the herd while Changunak would keep house. It was a hard winter. Seal and fish were scarce and she could not afford to lose a single deer, who knew when her husband would return – if he would. 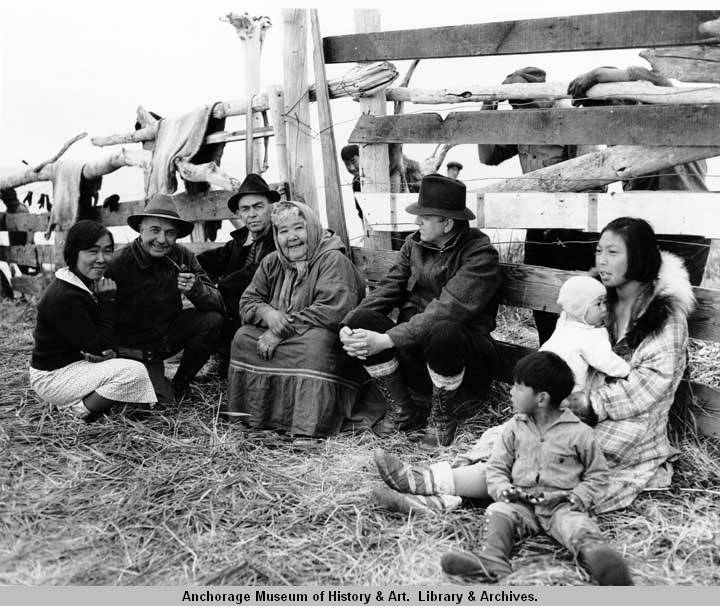 Her husband did return, albeit two years later around 1900, with 100 deer lost and in terrible health. He had contracted the measles and despite her care, he died quickly. Changunak did not have time to grieve long though. She had just buried her husband as word arrived that she might not keep her herd, being a woman and all. Finally she won the right to keep half of the couples 500 animals. But her troubles were far from over. In 1902 the gold rush had arrived in Alaska and miners were flooding the small settlements, taking the reindeer as easy ressources. Parts of Changunak’s herd was stolen to serve as packing animals or shot for food and their remains left to rot on the tundra. The officials were worrying that soon her entire herd would be gone and decided it would be best to take the animals from her and move them farther north to safer ground. But Changunak would have none of it. Instead she went south with her stock, resettling in the village of Unalakleet.

Safe from the miners, she was now confronted with another problem: word had gotten out that the Reindeer Queen was widowed and suitors lined up. Everyone wanted to get their hands on the biggest herd in the state and thus the woman it belonged to. She refused them all. But not only the suitors wanted their piece of the cake, Charlie’s brothers too claimed that the herd belonged to them; they referred to the ancient Inupiat ways according to which the widow only gets what the brothers give her. She reminded them that they were living under white man’s laws now and according to those the woman inherits the man’s property. The legal battle went on for seven years but eventually she won. She was now the undisputed owner of the largest reindeer herd in the entire Arctic.

Changunak did marry again eventually, a tall, quiet hunter called Andrew Andrewuk. This time her husband did not take any part in the reindeer business and under her proficient management her herd grew to 1500 animals at its peak, making her a true Queen of the Reindeer. And she passed on her craft. As she did not have any biological children, she adopted orphans as epidemics were decimating the population and taught them all she knew. Continuing to follow the tradition of generosity Changunak never turned away anyone in need and shared everything she had with those less fortunate. Thus she became known not only for her success as a businesswoman but also as an important and beloved member of the community. 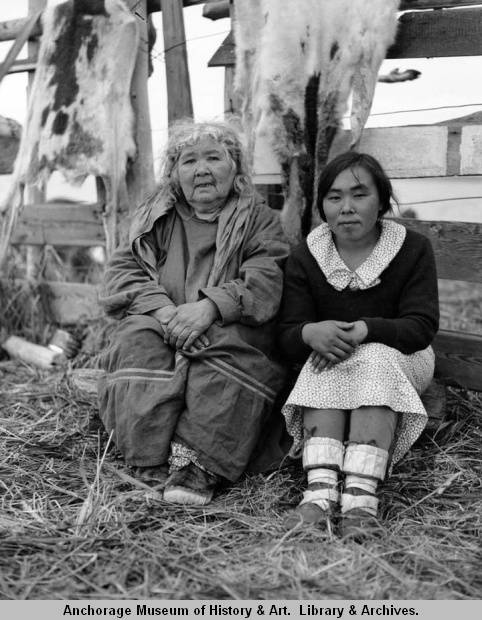 In 1914, when she was nearing her fifties, her children could barely remember a time without reindeer and it was then when the last big catastrophe hit. The Inupiat and other tribes were forbidden from selling reindeer to the white population to secure their livelihoods, but one white man, Carl Lomen, managed to get his hands on a herd anyways, through a Finnish herder to whom the restrictions did not apply. Immediately he began building a business American-style, steadily driving the Natives out of business. Changunak lost her best herders to him and her best customers, she began losing animals as she could not supervise them all at once. And again she began to complain, rallying the other deerkeepers to do the same. Fifteen years they fought, then the Great Depression came along and prices plummeted, Mr. Lomen was in financial trouble. Finally in 1937 his herd was sold and the Reindeer Act was passed, which forbids anyone except for Alaskan Natives to own reindeer in the territory. 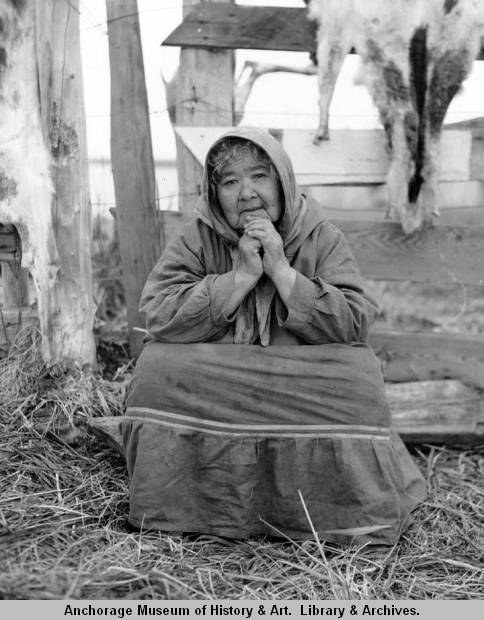 Now almost 70, Changunak realized that the world around her had changed fundamentally. There were fewer and fewer reindeer now and she became too old to care for her own herd. Two of her grandchildren moved in with her to lend her a had. She became known as the village elder who had known the Russians and people would bring her hides to make into shoes, the way her ancestors had done it, the way her mother had taught her.

On a winter’s day in 1948 Changunak Antisarlook Andrewuk, Sinrock Mary was pronounced dead. She received a communal burial and is remembered dearly by her community, not only as the Reindeer Queen, but also as someone who kept the Inupiat way alive against all odds. Until this day whenever reindeer are seen in the north people think of her. And sometimes people say they can still see her large herd roaming the hills.