Did you know that the first author ever was a woman? Well, we can’t say for certain as for a long time all writing was anonymous. But the first person to ever put their name on their work was today’s heroine: Enheduanna, Sumerian High Priestess. As far as we can tell, her opus encompasses 42 temple hymns and a number of longer texts, representing the first human attempt to compose a systematic theology. Isn’t that amazing?!

Enheduanna’s story takes us way back in time, to the ancient city of Ur in 2300 BC. Given how little information we have about people from that time, even royalty, it is fascinating how much we know about her. So let’s get started!

She was the daughter of one of history’s earliest empire builders, Sargon the Great, king of Akkadia. And great was his conquest indeed: his reign extended from all of southern Mesopotamia to parts of Syria, Anatolia and western Iran. In the late 23rd to early 22nd century BC, he incorporated a number of Sumerian city states into his kingdom and this is where our knowledge of Enheduanna’s life begins. While the Akkadians and Sumerians were culturally not quite that dissimilar and worshipped the same gods, their languages still differed and tensions arose. So Sargon appointed his daughter High Priestess of the city of Ur. That way she could keep an eye on the population and exert Akkadian influence.

The position of High Priestess was a powerful one indeed as the temples were not only religious places but social and economical centres as well. And the Ziggurat of Ur was one of the most significant temples in the Mesopotamian valley – in the picture you can see the modern reconstruction behind the ruins of the original.

Enheduanna’s religious duties included caring for the statues of their gods, offering sacrifices (animals, but also jewellery and produce) and interpreting dreams and omens. She and her staff were also responsible for cataloguing astronomical movements, a scientific process, although it is unclear how exactly they did this. Furthermore she controlled quite a large plot of land, employing an array of people such as fishermen, farmers and shepherds. Her land brought in a good amount of money, so the temple also functioned as a bank – which was overseen by Enheduanna as well. On top of that she also had to maintain relationships with the other temples in the area, advocating for her deities but also for her father.

I’d like to get into her daily religious duties a bit more because her role and status were tightly bound to her position of High Priestess. You can see her performing those alongside her staff on the disc in the picture; Enheduanna is the one in the middle with the frilly dress. 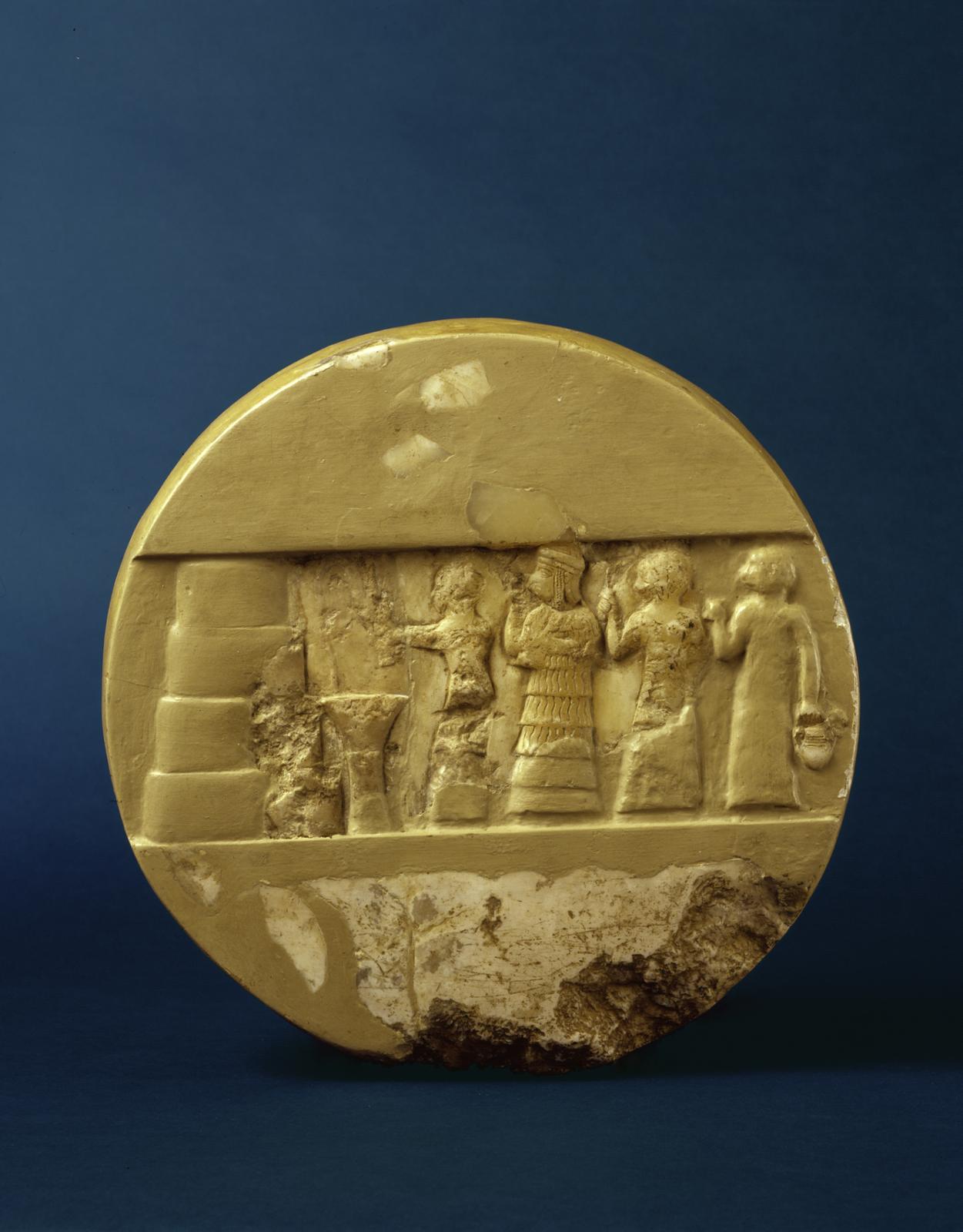 As High Priestess she was known as the “Wife of Nanna,” the Akkadian moon god and served him as well as his divine wife Ningal and their daughter Inanna. And she seemed to have had a real soft spot for the latter, starting a whole cult revolving around her which eventually made Inanna one of the pantheon’s highest-ranking deities. The temple was adorned with statues of the gods which were bathed and dressed ritually every day by the priestesses, but not before they themselves had cleansed themselves thoroughly and brought their offerings. Once a year, Enheduanna took part in a ritual of sacred marriage, where she lay with a mortal representative of Nanna. Another theory is that Enheduanna represented Inanna, a goddess of love and fertility, in this rite. Whether it involved literal intercourse or not is unclear, but is is far from improbable – there are a few lines of poetry that strongly suggest a physical component to these rituals. Certain is that this union was intended as some sort of blessing, ensuring the land’s fertility and the temple’s prosperity.

Now that her background is laid out, let’s get to the interesting part: her poetry. Yes, I too am wondering where she found the time to write besides all her duties and responsibilities. And yes, it gets even more interesting than ritualistic sex.

I already said before that Enheduanna wrote a total of 42 temple hymns – for comparison, Shakespeare “only” wrote 37 plays, and her count does not even include her other texts! To be fair, it might be that other authors used her fame and put her name under their own manuscripts but analyzing the style, it is pretty likely that most if not all of them were written by Enheduanna herself. Her work is generally divided into these temple hymns and her other texts which are mainly poems to her favourite goddess Inanna. In the picture you can see that they carved their letters into clay (the depicted text is not by Enheduanna though, I couldn’t find a plate that was certainly hers.) The former were means of communication between the temples and were not only used for religious exchange but also as propaganda for King Sargon, meant to dissolve tensions between the two people of the kingdom. However these texts are so lyrical in nature that they are unlikely to be purely political in nature – and if they basically were political pamphlets, why should she have signed them with her name when this was unheard of?

Here is why: she was proud of her work! It was not that she felt immortalized in her poems, or at least she never mentioned if she did, but she was fascinated by the fact that she created something entirely new and she took pride in it. 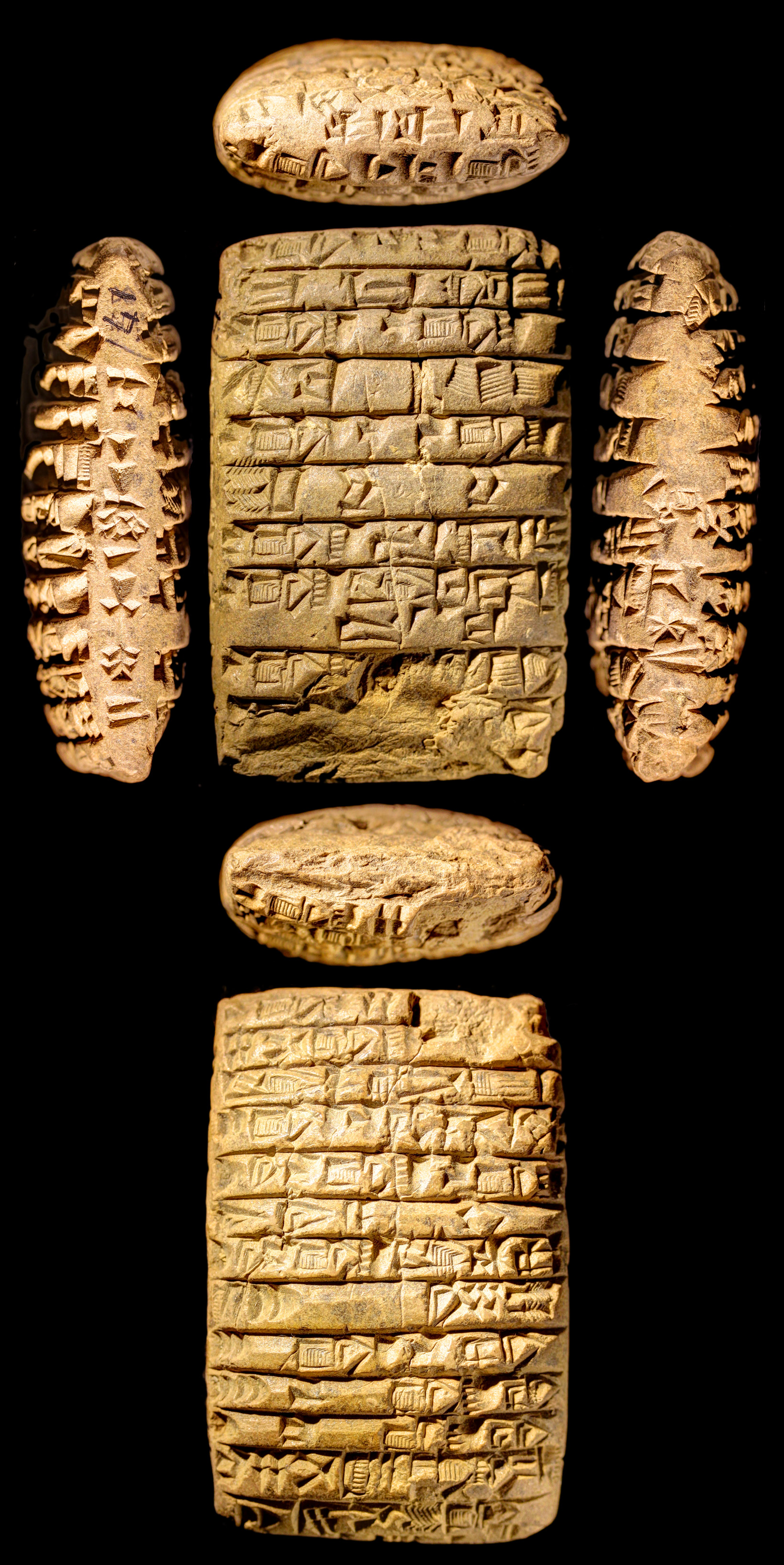 This kind of self-reflection was also completely new to poetry and writing in general. It wasn’t until more than 700 years later that the likes of Homer and Sappho started on that path – just to put things into perspective. Before Enheduanna there was no clear distinction between emotional and physical experiences, between mortal and divine in writing; she was the first to write about her inner turmoils and thoughts, marking the beginning of the human understanding of self.

Now back to an episode of her life when she was basically evicted from her temple and replaced by a man called Lugalunne, who was either a priest as well or a foreign king. Anyways, Enheduanna was not amused and wrote one of her most dramatic poems, one of those addressed to Inanna:

truly for your gain / you drew me toward  my holy quarters  / I  the High Priestess /  I  Enheduanna /  there I raised the ritual basket  / there I sang the shout of joy /  but that man cast me among the dead /  I am not allowed in my rooms  / gloom falls on the day  / light turns leaden  / shadows close in  / dreaded southstorm cloaks the sun  / he wipes his spit-soaked hand  / on my honey-sweet mouth  / my beautiful image  fades under dust  / what is happening to me  / O Suen [i.e. Inanna]  / what is this with Lugalanne?… / he gave me the ritual dagger of mutilation / he said / “it becomes you.”

The remarkable thing about this poem is that it was the first of its kind! Today we are used to emotions wrapped in words, but this was the first time that was ever done, more than 4000 years ago! And it’s poetic too! I’m not sure by the way if there truly was bodily mutilation involved, if it was a specific ritual or just another metaphor. Her exile however does not seem to have lasted very long as in the next part of her story she was already back home.

Another interesting part of her writing is the religious shift we are able to learn about from her diaries. As I already said, before her time the divine was one with the worldly, god was everything. This understanding however began to shift towards the belief that god is IN everything, a small but significant difference that implies that god transcends the worldly instead of being one with it. And Enheduanna did not like that notion, so she composed a poem (which is pretty long so a summary has to do): While Inanna was a relatively “young” goddess, she still stood for the old way, uniting the contradictions of life; the lover and the warrior, birth and death, growth and destruction. When the mountain Ebih defied her, she unleashed all her fury upon him, completely destroying her adversary.

What makes this story so fascinating is that Ebih is described as an almost utopian place with lambs and lions living in peace (bible, anyone?) and Inanna flat-out bulldozes it which Enheduanna is obviously more than okay with. Why is that? Because it is unnatural. Nature is not merciful an harmonious, there are contrasts, there is good and bad, light and dark. Eternal peace does not fit into this world view and Enheduanna has Inanna annihilate it entirely.

Obviously that opinion didn’t stick and was eventually replaced by a more distinctive view on religion and the gods – although Inanna did stick around for around 2000 years still, donning the names of Ishtar and Cybele among others. Ironically it was Enheduanna who lay the groundwork for this development. Had she not began her journey of self-awareness people might not have differentiated between divine and worldly for another 1000 years or so and the old gods would have survived a little longer. On the other hand, is there nothing divine in creating something that never was before? And in this aspect maybe Enheduanna was not all wrong.

Do you want to read all of her poems now? Because I did!

Unfortunately there is no complete collection on the internet, but you can find a selection of her temple hymns here (click) and there is one of her Inanna poems here (click.)
You can also hear one of her texts in the original Sumerian here (click and scroll down to the bottom.)