This time I’d like to introduce you to one of my biggest history crushes: Her name is mostly mentioned in relation to her famous family and as a famous mistress, but she is so much more than that. Today’s post is about Hortense Mancini, a runaway wife who bedded kings. Are you interested yet? Because it keeps getting better. But let’s start with the beginning.

Hortense was born in Rome as the fourth of the five Mancini sisters, who were to become famous for their beauty and wit. When their mother was widowed in 1650, she sent the girls to Paris to live with their uncle Cardinal Mazarin. She hoped that his position as the king’s minister would allow her daughters to find suitable husbands. And the plan worked. The sisters were superstars at the French court, famed for their olive-skinned beauty which differed from the “standard French girl” and for their scandalous lives; either praised or despised, but definitely talked about. They even had a collective name: “The Mazarinettes” – remind you of anyone? (In the picture, Hortense is the one on the far right.) 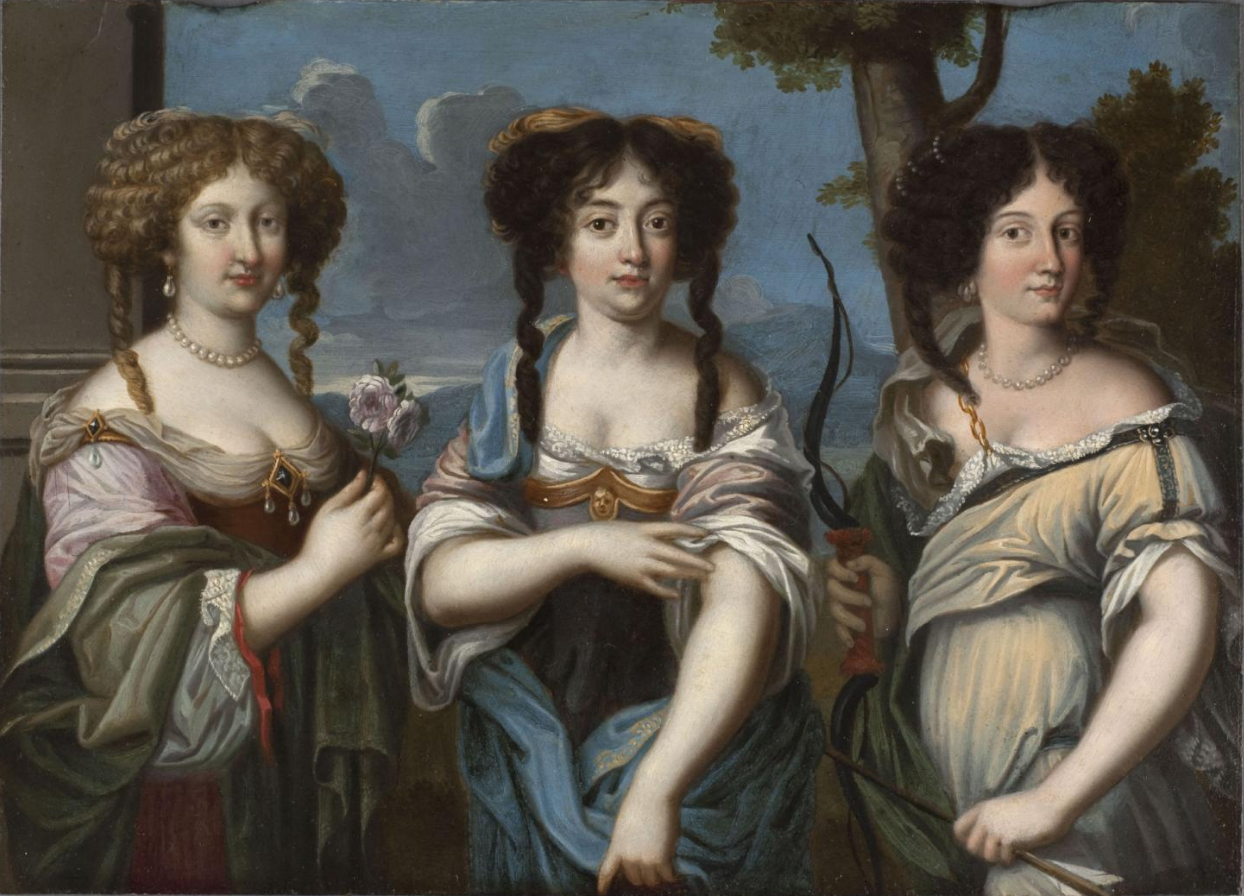 Anyways, there were a lot of suitors. And I mean a lot. And they were respectable too. But because Hortense was her uncle’s favourite, no one seemed to be good enough for her. The cardinal had rejected a ton of suitors, among them Charles II, the exiled King of England (who funnily enough was legitimized only a few months later and was quick to reject the cardinal’s offer of Hortense’s hand and a lot of gold – hurt pride and all.) Finally in 1661, on his deathbed, Mazarin signed a marriage contract between Hortense and one of Europe’s wealthiest men: Armand Charles de La Porte de La Meilleraye. Not a good choice as it turned out. 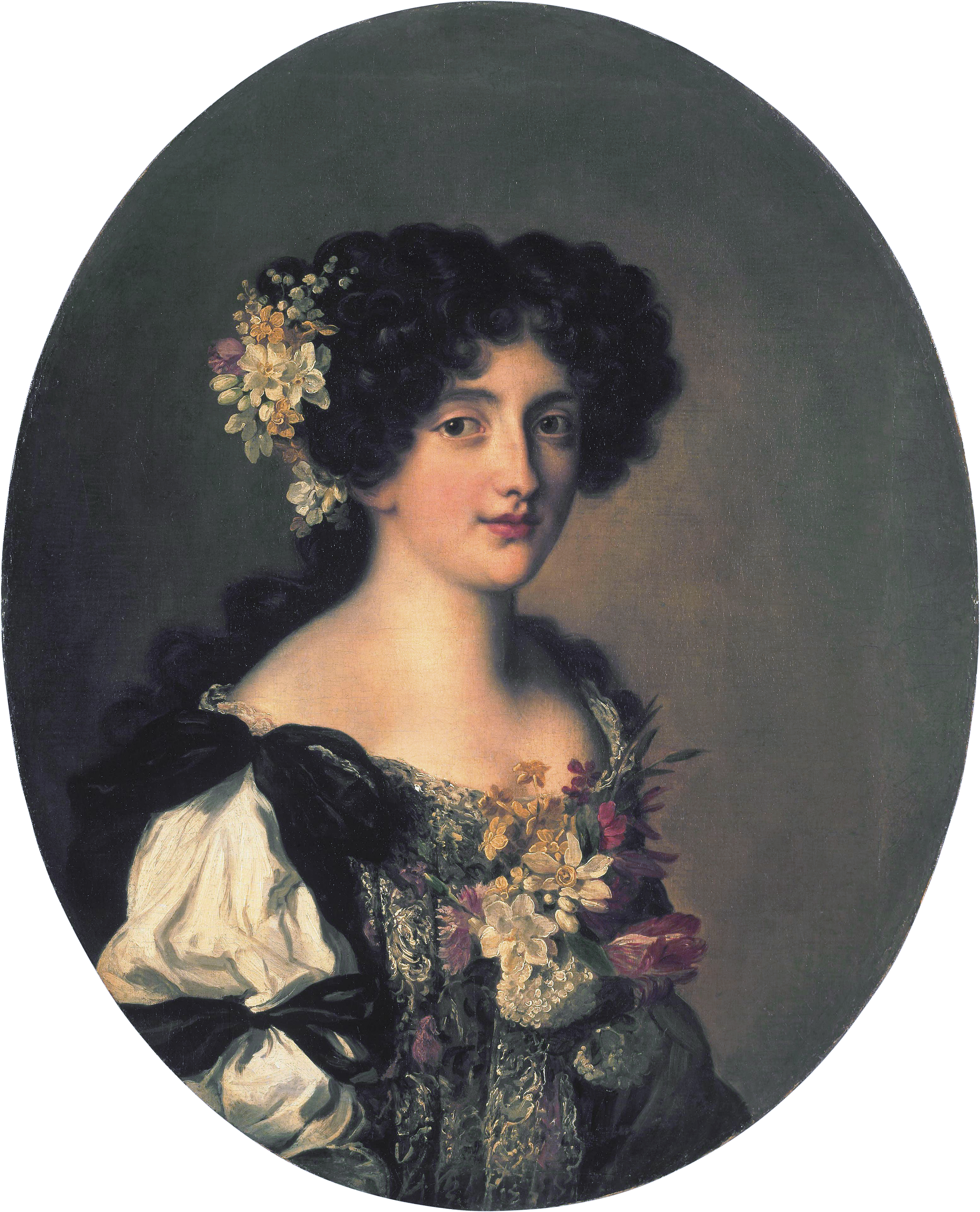 Hortense was a cheerful girl (just look at the flower portrait on the left!), liked by everyone who met her, while Armand was a grumpy and jealous person. Also he was twice her age. Not to mention that he had that weird obsession with sex – and not in a good way. In his vast art collection, every bit of nudity was either painted over or chipped off, the teeth of his female servants were knocked out so they wouldn’t attract suitors and he tried to keep them from milking the cows (because udders are sexual, you know). Hortense was forbidden from meeting with any other men and often woken up at midnight when her husband decided to sweep her room for hidden lovers. Finally he forced her to move to the countryside with him, away from her beloved city.

Sure enough, Hortense was more than unhappy. And she decided to do something against that. And so she took a lover who was her age. Her name was Sidonie de Courcelles. Armand was shook when he found out, oh, the immorality. So he put both girls in a convent. That’ll teach them. Well, that plan kinda backfired – who would have thought? Honestly, I’m a little sorry for the nuns. The two girls were basically the Fred and George of the nunnery: they spiked the Holy Water with ink, flooded the nun’s beds and even tried to escape through the chimney. So in the end Hortense had to reluctantly return to her husband. She stayed for seven years, in which she bore four children. She did not idly take the abuse though. It was around that time when she started on her memoirs – highly unusual for women in the 17th century. Her main reason was to chronicle her husband’s behavior to have a solid case against him in court. It did not do her any good though and her attempt to divorce Armand failed.

But now she truly had enough and bolted, donning men’s clothing and leaving her children behind. A move so unusual at the time, that it attracted a lot of attention – not only from the public, spawning own magazines devoted to the topic, but also from the court. Soon the French King and her former suitor, the Duke of Savoy offered themselves as her protectors. Graciously she accepted the pension offered by the king and moved into the household of the Duke. Unfortunately he died not long after and his wife kicked her out again. Once more she was alone. Her husband had managed to freeze all of her bank accounts, including her pension from the King, which left her penniless – unless she returned to him. But that was out of the question. Enter the English ambassador. To secure his own status and maybe even improve it a little he’d like Hortense to try and replace the current mistress of Charles II. Does that name ring any bells? Right, the guy she’s supposed to seduce is the same King of England who wanted to marry her earlier, which didn’t quite end so well. Still, she was willing to give it a shot. Where else should she go anyways? 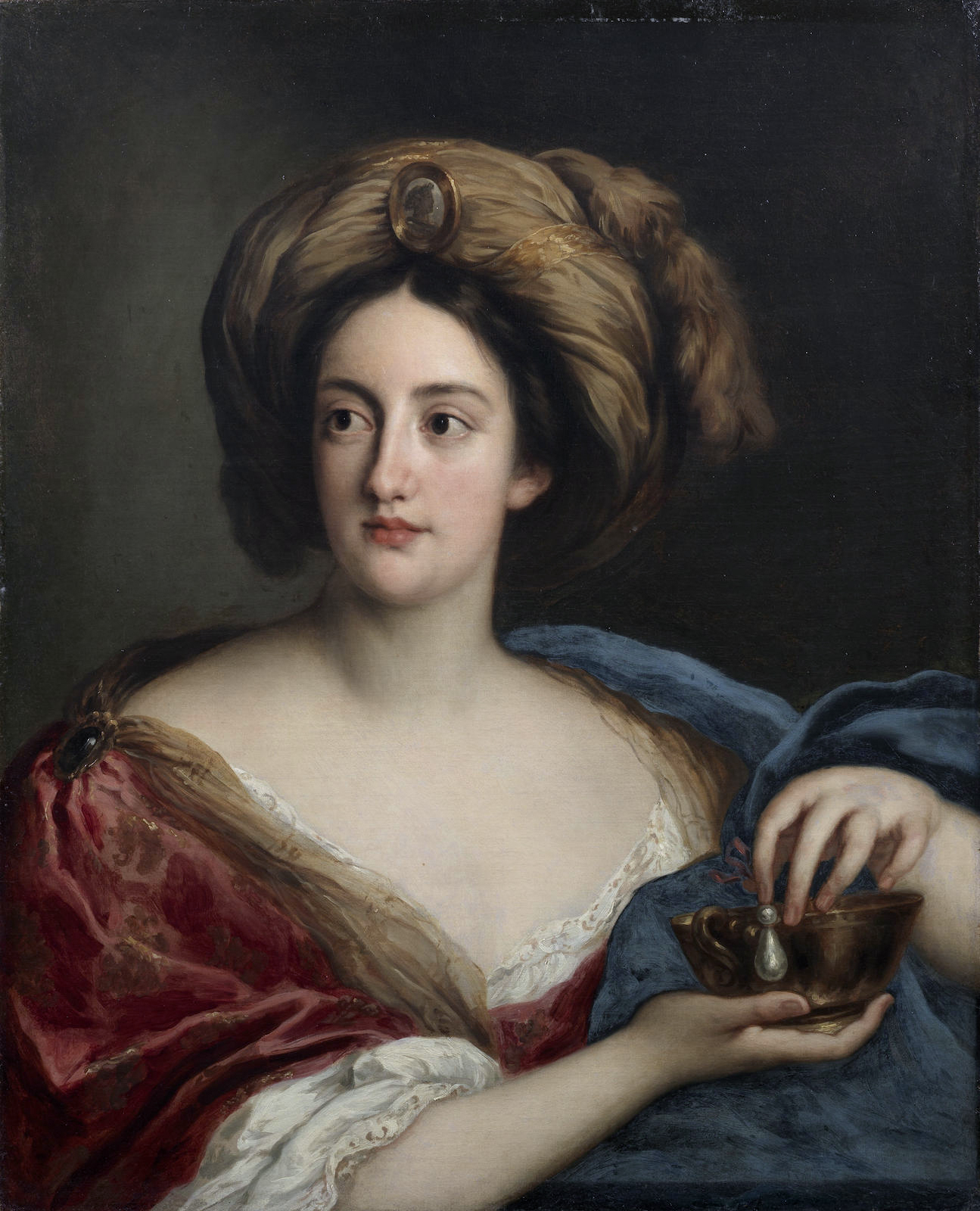 Soon she was on her way to London, pretending to be visiting her cousin there and once again dressed as a man. She travelled through Germany, having her memoirs basically published on the way. In January 1675 she arrived at the English court and by August she had been given an apartment and a generous pension by King Charles II. Less than one year later, she fully took the place of his chief mistress. It was the perfect match. They both loved lavish parties, riding and fencing. The King didn’t even mind her refusal to address him as “majesty” or her numerous affairs (playwright Aphra Behn even dedicated the introduction of one of her novellas to Hortense, turning it into a full-blown love poem.) And he liked her penchant for cross-dressing. Life could have been great. 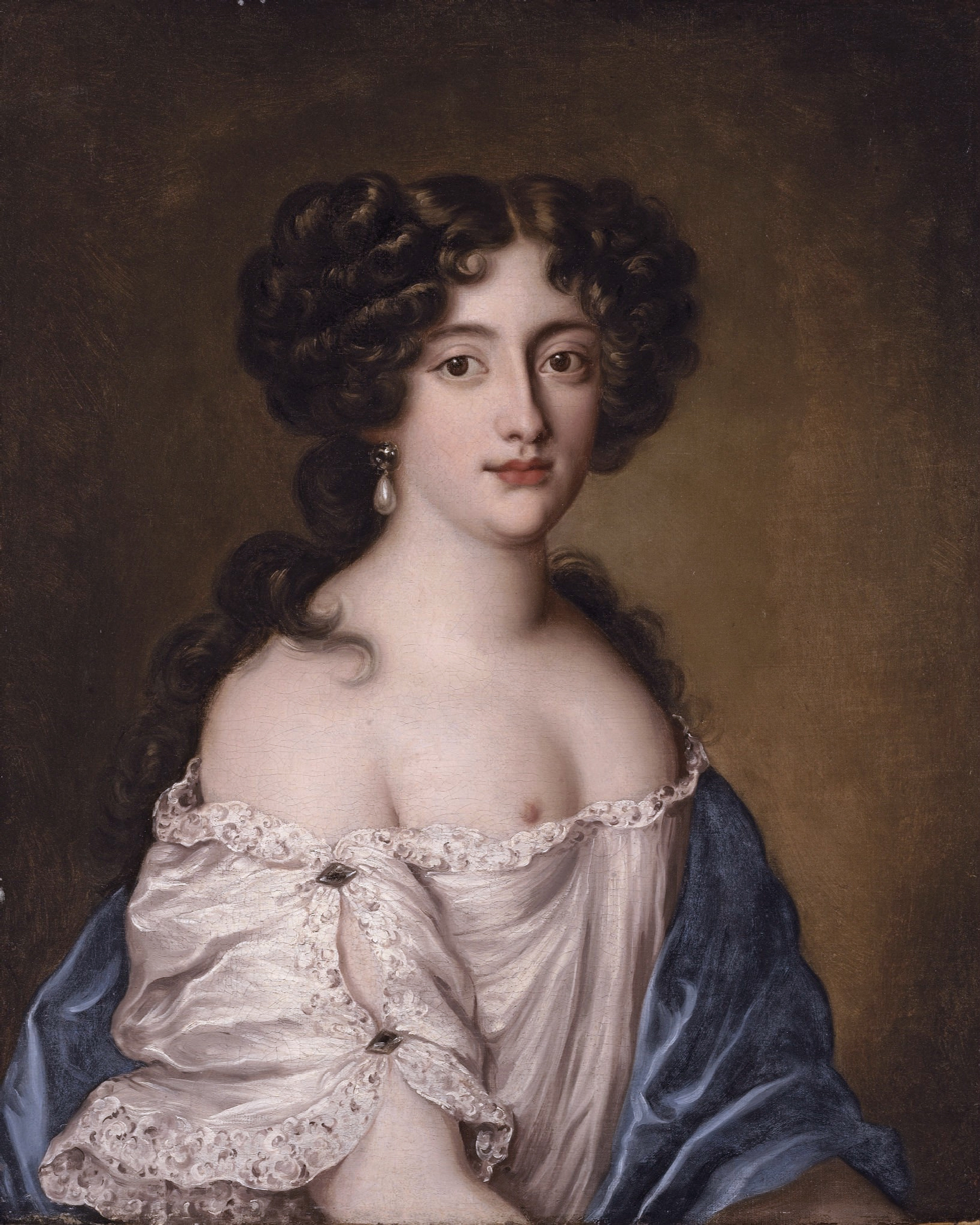 And it was, until Hortense decided to start a relationship with Anne of Sussex. You see, generally the king didn’t care which beds she hopped into, but Anne was his daughter – an illegitimate daughter, but still. It didn’t really help that the two girls were caught in the midst of a friendly fencing match. In their nightgowns. Right in the middle of a public park. Watched (and presumably cheered on) by a group of onlookers. Immediately Anne was sent to an estate in the country, where she reportedly refused to leave her bed and just lay there, kissing a small painting of her beloved Hortense. That alone would not have tipped the King over the edge, but then Horense took the Prince of Monaco as her lover. Another royal was just too much for poor Charles II and he refused to pay her pension for a few days, but quickly relented. Hortense however had to give up her position as the King’s favourite to her predecessor in 1677. They did however remain friends until his death in 1685.

With both of her protectors dead however, Armand came back. Yep, I had hoped to never hear of him again as well. And so in 1689, he went to court, demanding his wife to return to Italy with him. But Hortense fought – and won. She was allowed to stay in England. And while her pension was reduced by the new King she kept her estate, which she turned into a salon for intellectuals and artists. In 1699, Hortense too died. It isn’t entirely sure how, but her drinking problem is mostly assumed to have been her downfall, but there are also rumors of a suicide.

One might think the story of Hortense Mancini ends here. But did you forget that Armand is still alive? Yes, even after her death, he couldn’t just let her be. He literally took her dead body with him while he travelled the country, visiting all the estates she had despised so much. It took four months until he finally allowed her to find a resting place in her uncle’s tomb. I hope she whoops his ass in the afterlife.

You can still buy her autobiography (and that of her sister)!
It’s on amazon but if you can, please support your local bookshop!