I would like to introduce you to two badass ladies of the Crow Tribe: Osh-Tisch and The-Other-Magpie who fought at the Battle of the Rosebud!

A little preface: Osh-Tisch was baté (also badé or boté), which is the Crow word for Two Spirit. This term describes the third gender, recognized in most Native American societies. Two Spirits fulfill the duties of the opposite gender they are assigned, or often the duties of both genders. Baté specifically refers to male-bodied people, that live as women. This is why I will be using female pronouns referring to Osh-Tisch, as the members of her tribe do.

So let’s get started: Enter Osh-Tisch, baté of the Crow Nation. And not just any baté, but one of their leaders, described as a regal personality. In this highly regarded role, she lived separate from the main area and took on a number of roles including artist, medicine woman and shaman. As a skilled craftswoman who made intricate leather goods and large tipis, she earned the right to construct the buffalo-skin lodge of the tribe’s Chief Iron Bull. However, on the day she earned her name, translating to “Finds Them And Kills Them,” she showed what a ferocious warrior she was as well.

The sources on The-Other-Magpie are a little less extensive. It is known that she was an unmarried woman, pretty and wild. Her brother had been killed by the Lakota not long ago and she wanted revenge.

At the Battle of the Rosebud, the Crow fought in a coalition led by the US Army against the Lakota and Cheyenne.

During the battle, Bull-Snake, a Crow warrior was wounded and fell off his horse. In a second, Osh-Tisch lept from her horse and faced the charging Lakota (who did of course notice their advantage). Hefting her rifle, she fired shot after shot at the approaching enemy, reloading as fast as her fingers allowed it, defending her fallen comrade.

Meanwhile, The-Other-Magpie decided it was on her to help and began to ride towards the Lakota, screaming from the top of her lungs. She did not have a gun. Or bow and arrows. The-Other-Magpie had a stick. A coup stick to be precise.

What is a coup stick you ask? There was this tradition among Native warriors to ride into battle unarmed but with a decorative stick. The goal was, to hit as many people as possible with it without dying – so, kind of the most dangerous game of tag ever. The more people you hit, the more you were allowed to decorate your stick and it would become quite fancy indeed.

The-Other-Magpie’s stick was not fancy. It had a single tiny feather on it.

So, there was The-Other-Magpie, charging the Lakota, wildly waving her coup stick, spitting at them while screaming “My spit is my arrows!” – and there was Osh-Tisch, standing over the fallen warrior, shooting bullet after bullet at their enemies.

Believe it or not, The-Other-Magpie did land a hit on a (presumably pretty confused) Lakota warrior and a second later he fell down dead, hit by one of Osh-Tisch’s bullets. Horrified by this mad but seemingly supernatural warrior woman, the Lakota scattered and The-Other-Magpie took the fallen’s scalp. Riding into the village, she cut it up and distributed it amongst the men so they would have more scalps to dance with in the post-battle ceremonies. It was one of 10 scalps taken by the Crow that day.

This story would most likely have been forgotten, if not for Pretty-Shield, medicine woman of the Crow who, while recounting details from this battle, told of her. You can find her original account here, if you are interested.

Now the story starts to get a little sad, so feel free to just stop reading here if you want (I’d totally understand that.)

In the following years, the Crow were confined to reservations and government agents and missionaries began to visit, starting the oppression of Two Spirits and anything apart from the very screwed morals of the time. In the late 1890s, Osh-Tisch and the other baté were imprisoned, forced to cut their hair and wear men’s clothing by an agent named Briskow. The Crow however were not okay with this at all and their protests had Briskow fired. Sadly however, the gender oppression was not over at all and many Two Spirits assimilated to society and dressed like their assigned gender. Those who could not bear it, committed suicide or were driven into substance abuse. Unfortunately the numbers are high.

Osh-Tisch did not give up though, and continued to try and educate her contemporaries. When asked why she wore women’s clothes, she’d answer she was “inclined to be a woman, never a man.” When asked what work she did, she’d reply “All woman’s work” and proudly present an ornate dress she had made.

Besides trying to normalize who she was, she started an intertribal network of Two Spirits. They worked together, secretly communicating with each other, coordinating their efforts to make people understand and providing a support net for one another.

Sadly her efforts were not rewarded and she remains one of the few Two Spirits whose name and story has survived until today. When she died in 1929, the ancient knowledge of the baté died with her.

There is a modern movement to revive the idea and tradition of Two Spirits among the tribes, but it has been met with great resistance, even from within the tribes. Two Spirits today still face persecution and suffer from hate crimes. While it is commonly accepted that Two Spirits have existed, their role in society and especially their acceptance has been lost. It is important to remember them.

The picture shows her (on the left) with her wife. 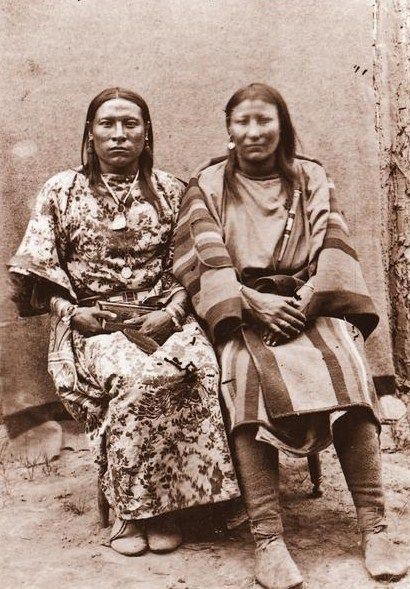